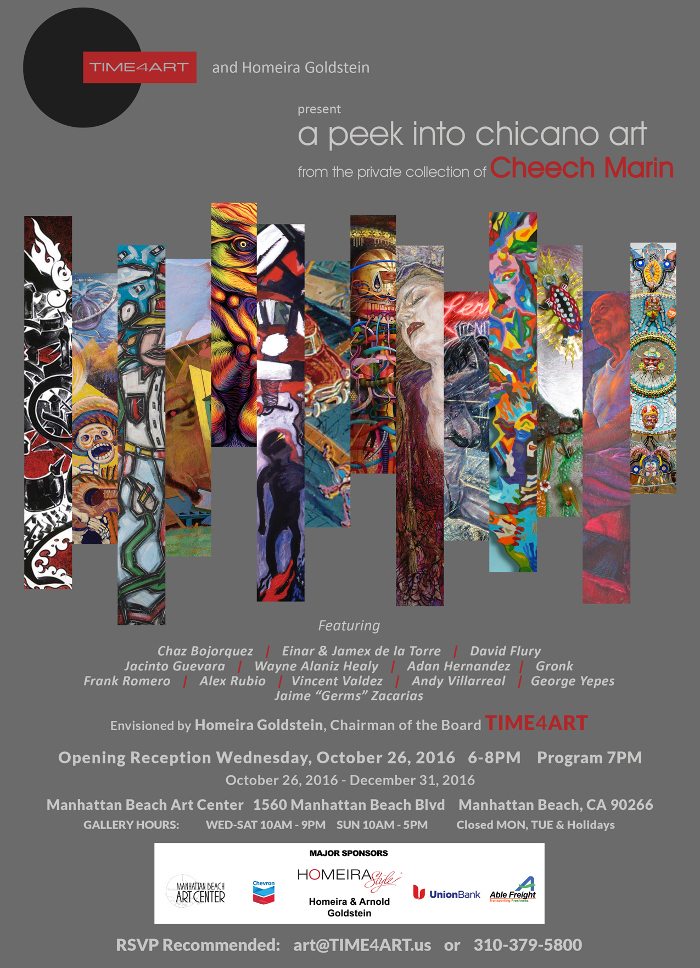 Cheech Marin’s high minded humor is considered to be one of the founders of stoner comedy. A cultural touchstone was embedded into half-baked movie theatres across the nation when he and comedic partner Tommy Chong released “Up in Smoke” in 1978. Today, Marin of the duo comedy team Cheech and Chong, has donated his own private Chicano Art Collection for a public exhibition called A PEEK INTO CHICANO ART showcasing works by 14 Chicano artists.

TIME4ART, a non-profit educational art organization in Manhattan Beach and its Chairman of the Board Homiera Goldstein, helped present and produce A PEEK INTO CHICANO ART. In a statement, Marin emphasized the relevance of Chicano Art, “Partnering with Homeira Goldstein and TIME4ART to further the recognition, awareness, emergence, and pride of Chicano art throughout the U.S. is important to our past and the future of our identity, culture, and lives,” he said in a statement.

By the mid-1970s, Chicano artists had become producers of visual culture in their communities, invigorating cultural identity and consciousness. One of their foremost aesthetics was finding a connection between social livelihood and art. A recurring theme revealed in murals and other art forms was the reclamation of a lost indigenous past.

Artists in the exhibition showcase art with a political & social sense, landscape motifs and portray individuals in and around the Chicano community on a variety of mediums, from paper to glass.