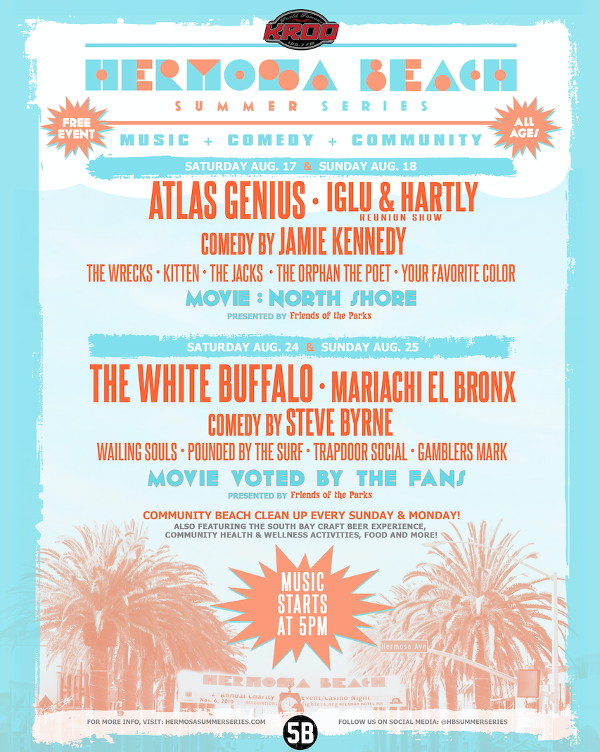 The luxury of riding your bike down the Strand for a free, live concert on the beach this August remains a reality as the official line-up for Hermosa Beach Summer Series was announced earlier this week. Rather than schedule concerts every Sunday, new producer 5B Artists + Media will feature live music the last two weekends of August  (Aug. 17-18 & Aug. 24-25). The free concerts start at approximately 5:00 p.m. and offer a mix of entertainment like stand-up comedy from Jamie Kennedy, beach yoga while Saturday night performances end with a free movie courtesy of Hermosa Beach Friends of the Park. Organizers will also set-up a “South Bay Craft Beer Experience”, possibly like the beer garden at Fiesta Hermosa.

Headline acts include hard-knock anthems from singer & songwriter The White Buffalo along with Atlas Genius and their all time radio hit Trojans. Rounding out the summer series are roots reggae sounds from the Wailing Souls, Los Angeles rock band The Jacks and all instrumental surf band Pounded By The Surf. Concerts happen on the sand just south of Hermosa Pier.

Free viewing of classic surf flick “North Shore” on the sand happens Saturday night with the following weekend’s feature to be decided by a poll. Event organizers have partnered with Heal the Bay to help clean up the morning after each performance. Schedule below provided by 5B Artists + Media.

Additional music by: The Wrecks, Kitten, and Your Favorite Color

Additional music by: The Orphan The Poet, and The Jacks

Additional music by: Pounded By The Surf, and Trapdoor Social

Movie: TBD, presented by Hermosa Beach Friends of the Parks