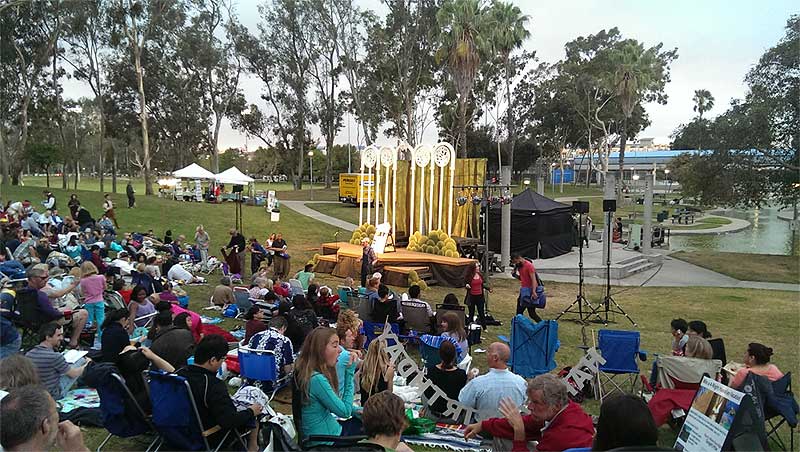 Believe it or not, the community driven, grant funded organization that barnstorms our local parks with professional theatre quality interpretations of England’s best known bard every summer, Shakespeare by the Sea, is currently in their 19th season. A true gift for all ages since the cost of admission is free and there maybe no other form of entertainment as personable as watching live actors perform under the wits of public space and open air. Shakespeare by the Sea returns to Wilson Park Friday and Saturday night.

Almost as ubiquitous as the Internet, Pokemon Go has become a summertime mobile phenomenon, a gaming app that has been downloaded at least 75 million times according to CNET. Even more surprising considering the indoor video game spectrum of behavior, droves of people play Pokemon Go outside with friends, family, co-workers, etc. So, it’s no surprise that South Coast Botanic Garden in Rancho Palos Verdes invites Pokemon Go players to their gardens for an event called Go in the Garden on Sunday.

The English Beat at Saint Rocke: Friday, July 29, 2016 – 6:00 PM – 2:00 AM In the late ‘70s, The English Beat brought their hypnotic rhymes to America. The six member band fused soul, reggae, pop, and punk into a danceable sound. Today, consummate showman Dave Wakeling has continued to keep The Beat alive and strong. How could he not? Dave continues to tour the world as The English Beat with an amazing all-star ska backing band playing all the hits of The Beat, General Public, and his new songs. The English Beat perform live at Saint Rocke Friday night, 142 Pacific Coast Hwy., Hermosa Beach, CA 90254. tickets

Shakespeare by the Sea Presents: Othello: Friday, July 29, 2016 – 7:00 PM Southern California audiences have come to love Shakespeare by the Sea for its professionally-crafted productions of Shakespeare’s timeless plays, presented completely free of admission at dozens of local parks each summer. SBTS is in its 19th season and will enact a live performance of Othello, where gossip turns friendships rancid, and rumor brutally murders innocence, Friday night at Wilson Park in Torrance. All shows are admission free for audience members (donations are appreciated). Wilson Park is located at 2200 Crenshaw Blvd, Torrance, CA 90501. more info

Avon Walk for Breast Cancer Fundraiser at R10 Social House: Saturday, July 30, 2016 – 11:00 AM – 3:00 PMTeam Bananas for Ana is hosting their third annual silent auction and raffle to raise money for Avon39.org. This year is even better with an amazing waterfront venue, live music and more fabulous auction items from the usual suspects (and a pile of new ones) than ever before. From weekend getaways and LA Kings swag to golf passes and premium satellite TV. Join us at the beautiful and generously donated upstairs space at R10 Social House: 179 N. Harbor Drive in Redondo Beach, Saturday, July 30 from 11am-3pm.

2016 Summer of Music Free Concerts on the Pier: Saturday, July 30, 2016 – 6:00 PM – 8:00 PM For over 20 years, the Redondo Pier Association has sponsored the biggest free summer concert series in the South Bay of Los Angeles. Summer of Music featuring 20 bands, continues on Saturday, July 30 with a performance by Say Real (Reggae/Rock). The all-ages live music shows are free and open to the public and the main stage is located at the end of the historical Redondo Beach Pier over the water. more info

Shakespeare by the Sea Presents: Cymbeline: Saturday, July 30, 2016 – 7:00 PM Shakespeare by the Sea (SBTS) is proud to announce the opening of CYMBELINE, one of Shakespeare’s greatest plays. Enjoy summer with Shakespeare’s exciting ride of a play, filled with wild disguises, mistaken identities, deceit, treachery, magic potions, evil step-mothers and lost princes. SBTS is in its 19th season and will enact a live performance of Cymbeline Saturday night at Wilson Park in Torrance. All shows are admission free for audience members (donations are appreciated). Wilson Park is located 2200 Crenshaw Blvd, Torrance, CA 90501

Movies in the Park: Saturday, July 30, 2016 – 8:00 PM The Community Services Department, in association with local Torrance Homeowners Associations, is proud to sponsor Movies in the Park this summer. The movies are free to attend, for more information, please call (310) 618-2930. This Saturday night starting around 8:00 p.m. the city of Torrance shows the movie “Big Hero 6” at Paradise Park: 5006 Lee Street. more info

Pokemon GO Takeover at the Garden: Sunday, July 31, 2016 – 9:00 – 5:00 PM You want to be the very best? Like no one ever was? Good news! GO in the Garden was a huge success and South Coast Botanic Garden is inviting Pokemon trainers back again for a full Take Over in the Garden sponsored by Richeeze (food truck serving grilled cheese sandwiches). The Garden opens at 9:00 am and closes at 5:00 pm (last admission is at 4:30 pm). Please note that Garden admission applies to non-Garden members ($9 – adults, $6 – students/seniors, $4 – children). Garden members are FREE. All children must be accompanied by an adult (18+ years old). more info

Barbershop Day at Battleship IOWA: Sunday, July 31, 2016 – 10:00 am to 4:00 pm By popular demand, the Battleship IOWA barbershop will once again open and hair will be hitting the deck. That’s right the actual ship’s barbershop that serviced generations of sailors and even trimmed up the 41st President of the United States, George H.W. Bush will be open for business. Battleship Iowa is located at 250 S Harbor Blvd, San Pedro, CA 90731. more info