Check out the South Bay Events’ full listing of what’s going on in the South Bay for the 4th of July, 2019! This year the holiday lands on a Thursday, which may lead to a clear majority of the workforce calling in “sick” on Friday.

The 4th of July weekend is already upon us! With summer in full swing, the South Bay is notorious for being one of the best spots in the country to enjoy the holiday.  Once again, the South Bay will party like diligent patriots armed with red cups and a gaggle of beach 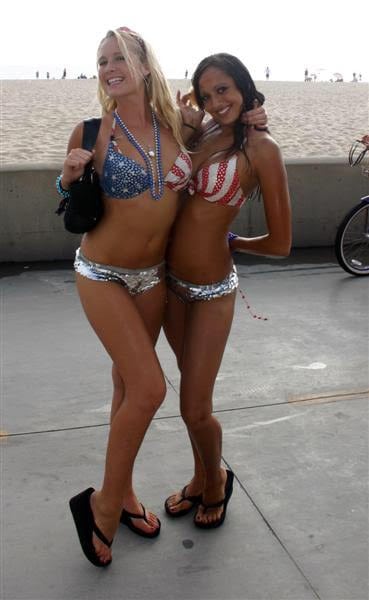 cruisers because it’s the Fourth of July around the Beach Cities. The legendary Ironman is on again for the 45th year, the only time alcohol is accepted on the beach (under heavy police presence, of course).

What you will read next is a curated laundry list of all the activities that make Independence Day in the South Bay such a spectacular event.

Wednesday, July 3 is shaping up to be a big day at the Pier, with many bars expecting huge crowds and people taking the day off work. Watermans, Sharkeez, American Junkie, Tower 12 and Patrick Molloys will all be filled to the brim. Alta House (formerly Ocean Bar) will be opening early and closing late. Wednesday night, you can go to a Pre-4th of July party and experience the ultimate 80’s cover band Wayward Sons at Saint Rocke in Hermosa Beach. Also playing at the Standing Room in Hermosa is Chewbetcha, a local band who is guaranteed to melt your face.

Baja Sharkeez in Manhattan Beach will also be hosting a 3rd of July party with a “Salute 2 Summer Celebration” featuring a hot-dog throw down, hula-hoop contest and drink specials.

Select Beer Store will be hosting their annual 3rd of July Party again this year by serving beers from Pizza Port Brewing in their tasting room starting at 4:00 p.m.

The Point in El Segundo is kicking off its Summer Concert Series on the 3rd, with Retrofit (Indie Rock) performing.

Pitcher House/ Upper Deck will be closed on the 4th itself so they’re going all out on the night of the 3rd, with a Girlz Rules Pre-4th Party running from 9:00 pm – 2:00 am!

One of the biggest days of the year is coming to the South Bay- the 4th of July! Residents of Redondo, Hermosa, Manhattan Beach and citizens from all around the South Bay celebrate the peak of the summer more so than any other spot in Los Angeles, and maybe the whole U.S.A. From crazy house parties, crowded bars and a swollen bike path plus several Fireworks shows, the biggest party of the year should be experienced at least once. See below for details on the Ironman, the official morning kickoff to the big day. Many bars will be having special events all day as well, including American Junkie, DJs at Alta House (formerly known as Ocean Bar), Sharkeez, Saint Rocke and more. The bars will be busy early, but there are other options away from the mayhem as well, and the Beach Cities have a full lineup this year:

2019 will have the traditional Fireworks shows, which are getting more impressive each year!

On Thursday, July 4, there is a major show inside Redondo Beach’s Seaside Lagoon which will be visible from the Pier and Harbor areas and will feature live music and all-day entertainment. With budget cuts canceling the traditional huge shows at Wilson Park in Torrance, the Redondo show will be one of the largest in the South Bay. The Redondo Beach Independence Day Celebration at Seaside Lagoon starts at 2:00 p.m. with many activities for kids and families including live bands, arts/crafts, workshops, water activities, dancing, food & beverage and more! Fireworks show will begin at 9:00 p.m., choreographed to patriotic music. Tickets available here. 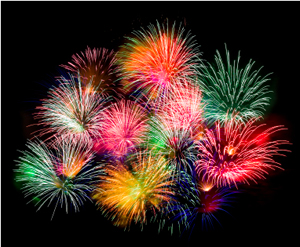 Torrance fireworks: The City of Torrance will be hosting a giant 4th of July fireworks show at the Toyota Sports Complex at the Torrance Civic Center. No tickets are required this year and it will be on a first-come, first-served basis. For more information, call the Community Services Office at (310) 618-2930. All other viewing areas will be 1st com, 1st serve.  The street closures around the area will begin at 6:00 p.m. so plan accordingly. Torrance CitiCABLE will broadcast the show live on Spectrum Channel 3, Frontier FiOS Channel 31 and over the air on KNET 25.2. A map of the parking, launch location and more can be found here.

Marina Del Rey fireworks: Marina del Rey’s firework show is back with a new budget thanks to donations from local sponsors. The roughly 20-minute show starts at 9 p.m. over the Main Channel. The pyrotechnic display will be choreographed to music that will be broadcast over KXLU-FM 88.9 and relayed over loudspeakers in Burton Chace Park. The park is at 13650 Mindanao Way (one block west of Admiralty Way) and Fisherman’s Village is at 13755 Fiji Way. To find out more about the show including some of the best spots to see the fireworks, check out their site.

Carson: The LA Galaxy will host 21st Annual 4th of July post-game fireworks show at StubHub Center, 18400 S. Avalon Blvd., Carson when the team takes on the Vancouver Whitecaps at 7:30 p.m. The fireworks show will start 10 minutes after the final whistle. For fans in attendance, there will be a test launch at halftime for fans to make sure they’ll have a good viewpoint of the postgame festivities, www.lagalaxy.com/tickets

RAT Beach fireworks are Cancelled: The Briles family previously hosted its privately funded fireworks show off the coast of RAT beach near Palos Verdes. After a hiatus, the show has been officially cancelled according to The Easy Reader, while lack of funding was the main issue.

The most unique event that makes July 4 so legendary around here is the HERMOSA BEACH IRONMAN competition. In this extreme athletic test, participants must run a mile, paddle a surfboard a mile and then consume a 6-pack of their favorite beer!

The first one to hold down their beverage(s) successfully wins, and you may want to keep your distance from the center of the action or you’re at risk of getting drenched. For pics of the event’s crazy action, check out the Ironman gallery. The action starts at approximately 9:00 a.m. and anyone over 21 is eligible to enter- just make sure you know that close to 1,000 spectators will be monitoring your skills. For those interested in participating, the Ironman is $20, and you will need to bring your own surfboard and 6-pack to join in. Keep in mind that alcohol fines are TRIPLED in Hermosa Beach on the 4th, and you will need to be very discreet if you choose to partake in the activities, especially soon after the Ironman.

Official signups for the Ironman will take place at Tower 12 at 1:00 pm on Wednesday, July 3rd! 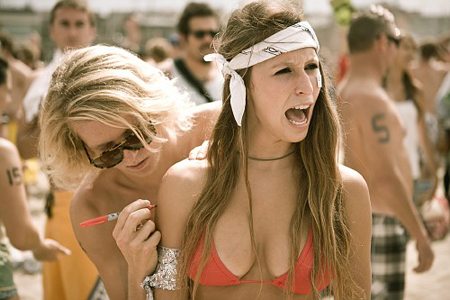 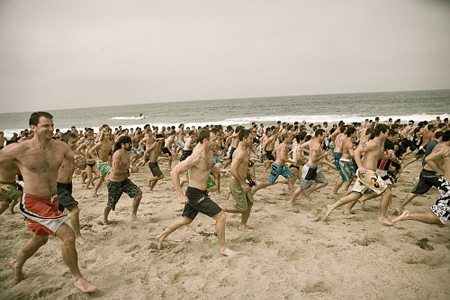 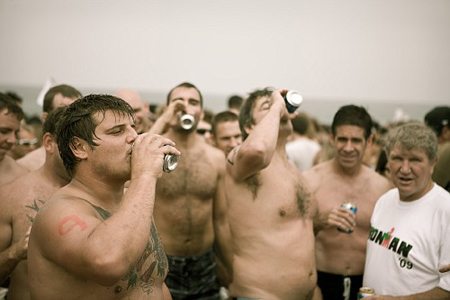 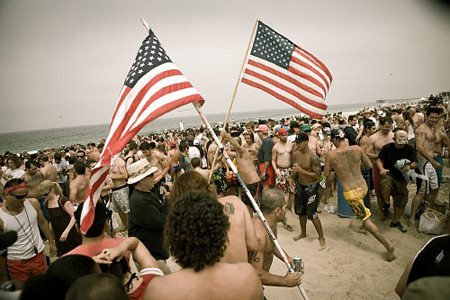 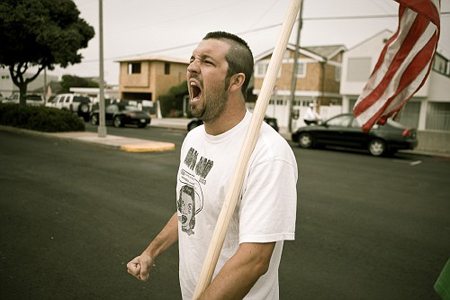 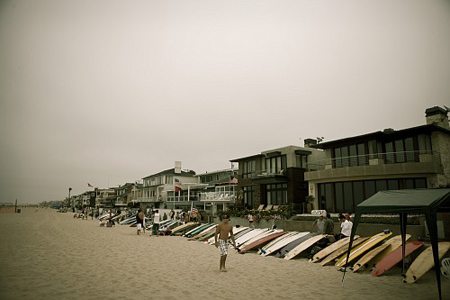 After kicking off the day in true Hermosa Beach style, the Strand fills up very quickly and by noon it’s almost impossible to walk. The entertainment options are plentiful and each year, and in the past there has almost always been an impromptu performance by local legends such as Pennywise. Another South Bay classic event occurs every July 4th between 7th and 8th Street in Hermosa Beach. The annual production is a tribute to Michael Jackson and it has been around as long as we can remember, complete with a light show and authentic dancing. A local lookalike steps out on a balcony high above the beach and puts on a show that is worthy of the King of Pop. With the recent passing of the Gloved One, this year promises to be the craziest show of all time. The show begins as soon as the fireworks end, and you won’t be able to miss the huge crowd that gathers in front of the Strand house before showtime. Finally, if you’re under the age of 21 and think you can get away with some shenanigans, the HB Police Dept. wants you to think otherwise:

Make sure you stay tuned to South Bay Events for updates of house parties, insider tips and more information as the biggest day of the year gets closer!! Get ready, because you never know what the 4th will bring in the South Bay…