The folks behind the bar are prepping and cleaning their tap lines for what is now Naja’s Place 11th IPA Festival that starts Wednesday, May 15 at 2:00 p.m. It is a week long event that caters to the most effervescent beer seasoning around, hops, ending on Wednesday May 22. Naja’s IPA Fest is serious business amongst beer geeks and for good reason. All types of IPAs (India Pale Ale) and DIPAs (think IPA on steroids) and cask beers will be on draft from local South Bay brewers as well as hop-centric beers from all over California and the west coast.

Naja’s Place pours some of the best local, regional and national brew around with a special focus on hoppy beers. (Photo by South Bay Events via Scott Hayes)

One of the most iconic South Bay craft beer watering holes, Naja’s Place IPA Fest represents the tacky but charming personality from which the culture of local, craft beer began. Featuring hop-forward beers available all week for a premium price, many kegs are tapped for special release or even new release. Pizza Port Brewing pours and takes over taps on Saturday (5/18) starting at noon and Russian River Brewing takes over on Thursday, May 16 starting at 2:00 p.m. Like in years past, there will most likely be some special cask beers too. Cask beer or ale is usually less carbonated and can have a stronger taste and smell since it is unfiltered (unlike kegged beer).

The Festival runs one whole week starting Wednesday May 16th at 2:00 p.m., so pace yourself, hydrate, and don’t hesitate to make multiple trips. All you need is a sturdy beach cruiser, a little Uber or a Lyft and an elbow that bends. Souvenir glasses will be available. Naja’s Place is located at 150 N. International Boardwalk in Redondo Beach. Follow Naja’s facebook page for up to date tap list and festival fun. 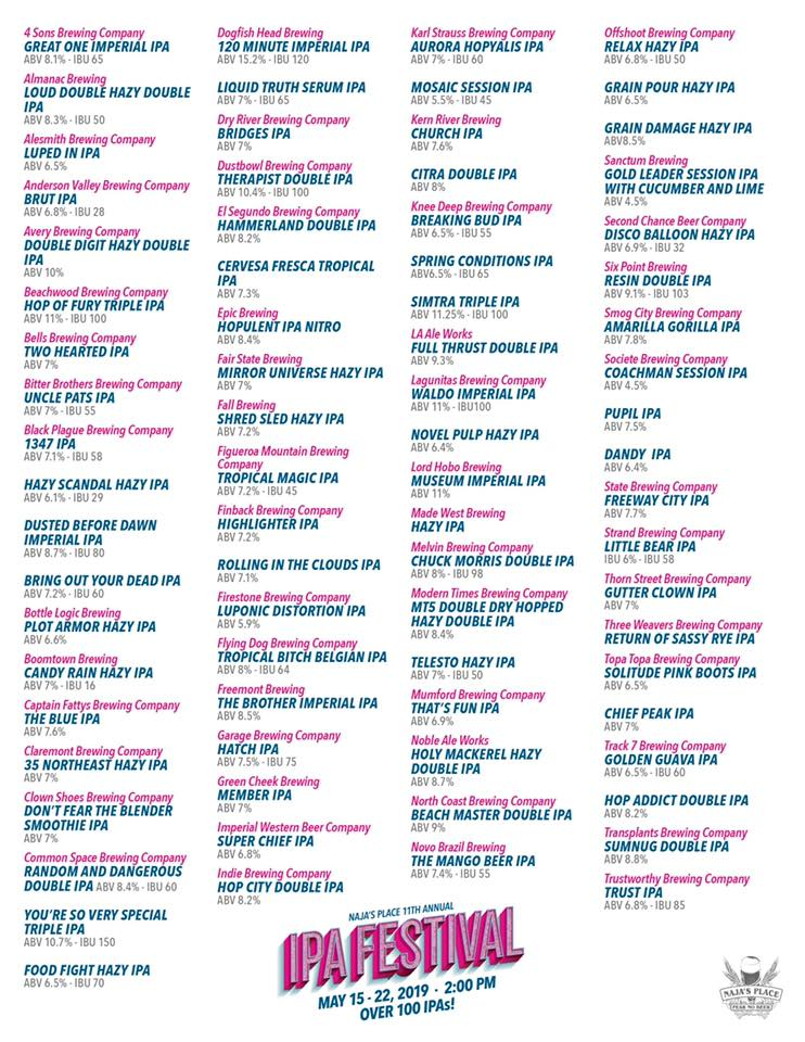