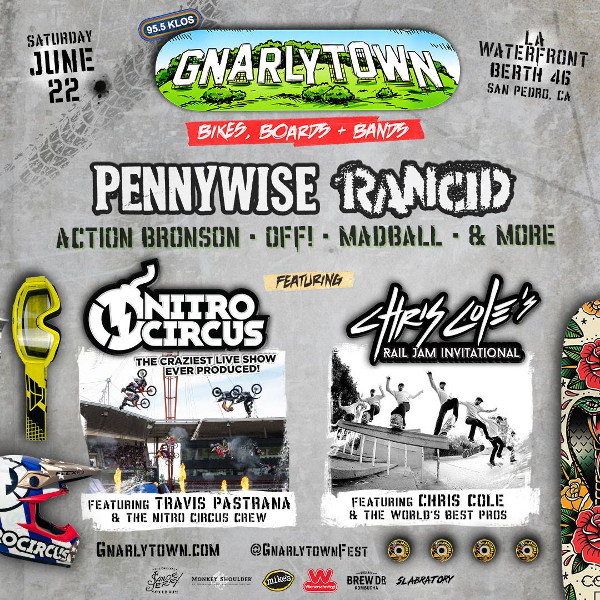 Gnarlytown: Bikes, Boards & Bands kicks this summer off in San Pedro with a festival style mashup of action sports, punk rock, and craft beer tastings happening along the LA Waterfront Berth 46 at the Port of Los Angeles Saturday, June 22, 2019. Gnarlytown showcases the daredevils of Nitro Circus, featuring Travis Pastrana and the Nitro Circus crew, while a collection of the world’s top skate athletes will show their skills in a free jam format during Chris Cole’s Rail Jam Invitational. On the concert stage, a lineup of legendary punk rock bands and other top music acts including Pennywise, Rancid, Action Bronson, Off!, and Madball will deliver live performances. For thirsty fans 21 and over, the event will also feature craft beer tastings (with purchase of a tasting pass) from some of the finest breweries in Southern California and beyond, including Rancid’s own collaboration with Ska Brewing, Brewstomper.

Nitro Circus features a star-studded cast of top tier athletes from FMX, BMX, Skate, and more who hold over 30 X Games medals combined, Nitro Circus’ athletes will put on four separate shows during the festival. These shows will feature Nitro’s notorious Giganta ramp that towers more than 45 feet high, giving the crew the speed they need to send it off of the newly debuted Next Level take off ramp that stands 15 feet high.

Chris Cole’s Rail Jam Invitational is an invitation-only attraction personally curated by Chris Cole and featuring a number of his closest pro skateboarding friends and some of his favorite skaters of today, including Ryan Sheckler, Tom Asta, Chris Joslin and many more, sessioning freely as friends do at a skatepark. Each best trick will be rewarded with a cash prize — the better the trick, the higher the cash amount.

General Admission tickets start at $39.99 (plus fees), while supplies last. Children under 5 get in free with a paid adult admission (this does not include VIP access). Rancid will bring elements of their new music and craft beer event, The Bash, which will offer tasty selections of various pale ales, IPAs, stouts, hefeweizens, saisons, and more, including the band’s own collaboration with Ska Brewing, Brewstomper Golden Ale. Tasting passes are sold separately, and are required for craft beer sampling. More info at www.gnarlytown.com