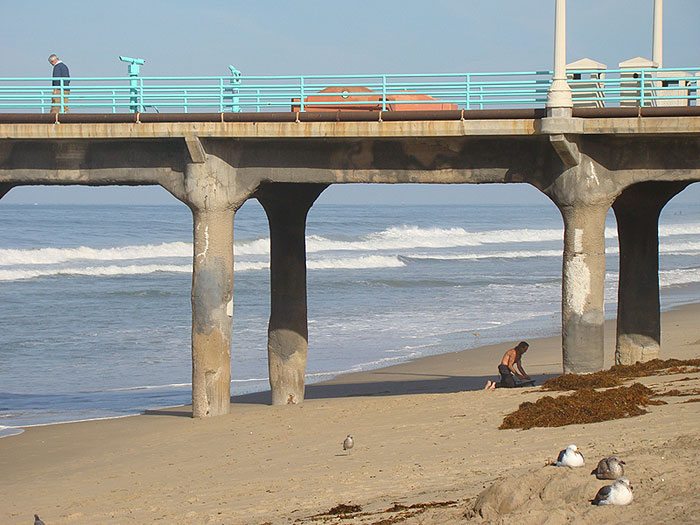 Halloween lands on a Monday this year, which means nothing to most kids as the concept of free candy and mischief don’t require a day off, not so for adults. Next Friday and Saturday night is the best time-slot for grown-ups, party people, and walking dead to masquerade, costume and elbow-bend around town. If you are planning to attend South Bay Scream at the Portofino Hotel & Marina in Redondo Beach, be sure and get your tickets in advance. This Halloween party draws over 1,000 freaks, zombies, maidens, witches… every year, so plan ahead.

Glass House Studio will be selling their hand-made glass pumpkins again at an event called Pumpkins on Cypress this Saturday from 9:00 a.m. to 6:00 p.m. Location: 618 Cypress Avenue in Hermosa Beach (next to South Park)

El Segundo Brewery Day-One Bottle Release: Friday, October 21, 2016 Hop forward brewery, El Segundo Brewery, serves up another day-one bottle release Friday: The 105 I.P.A. (India Pale Ale). ESBC’s branded nod to the 105 Freeway, which ends in the Gundo, debuts this Friday brewed with a brand new hop called Idaho 7 according to ESBC’s facebook page. It will be available throughout the South Bay and beyond at various bars and bottle shops, or pick-up a bomber at El Segundo Brewery, 140 Main St, El Segundo, CA 90245.

Old Town Music Hall: The Wolf Man (1941): Friday, October 21, 2016 – Saturday, October 22, 2016 Where classic silent films have been regularly scheduled in an authentic 1920s movie house with the Mighty Wurlitzer accompanying since 1968. Get your classic horror movie fix just in time for Halloween as the 1941 version of The Wolf Man howls upon the screen at the Old Town Music Hall in El Segundo. Tickets are $10.00 (cash only). Show times are as follows: Friday: 8:15 PM; Saturday: 2:30 PM. Every show begins with music played on the pipe organ, an audience sing along,and a comedy short. There is a 15-minute intermission, followed by the feature film. Location: 140 Richmond Street, El Segundo, CA 90245 (310) 322-259

Hungry Hearts 5K Scavenger Hunt & Harvest Festival: Saturday, October 22, 2016 – 8:30 AM 4th Annual Hungry Hearts 2016 5k Fun Run for Refugees with Scavenger Hunt and Harvest Festival takes place at the South Coast Botanical Gardens in Rancho Palos Verdes. There will be a scavenger hunt on the first lap for those who don’t want to do all laps with prizes awarded for the top 10 Scavengers. There will be a clock for personal timing of your run. Hungry Hearts will time the first 25 runners and the top 3 will get medals. Attendees can do 1 lap, 2 laps or 3 laps and each lap you receive a free item from the business community. In addition, lots of great prizes will be available by opportunity drawing. Register

Redondo Ballet Presents: Through the Pages: Saturday, October 22, 2016 – 3:00 PM & 6:00 PM Remember how much you loved having stories told to you as a child? This Saturday enjoy Through the Pages, a magical ballet experience for all ages, and remember all over again. In this fairy tale of fairy tales, you’ll see your favorite bedtime stories dance to life on stage, including the Wizard of Oz, Cinderella, Peter Pan, the Three Little Pigs and more. Performances at 3:00 and 6:00; tickets: $10/20 in advance and $15/25 at the door. Location: Redondo Union High School in Redondo Beach. tickets

Salome at James R. Armstrong Theatre: Sunday, October 23, 2016 – 2:00 PM The Torrance Cultural Arts Foundation presents a screening of “Salome,” the first opera of the season in the San Francisco Opera Cinema Series. Set in Biblical times, this erotically charged opera centers on a tangled triangle: the persecuted John the Baptist, a lecherous King Herod and the monarch’s pathologically seductive stepdaughter, Salome. The opera will be played back in high-definition Blu-Ray and stereo sound. At intermission, enjoy a glass of wine in the lobby or watch behind-the-scenes interviews onscreen. Tickets are $17.50 online. TOCA