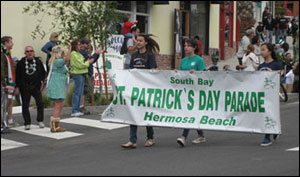 Unfortunately it looks like St. Patrick’s Day in Hermosa Beach is a touch too authentic this year as typical Irish weather has forced the Hermosa Beach Chamber of Commerce to re-schedule their St. Patrick’s Day Parade till next weekend, Saturday, March 24th. The parade was originally scheduled to take place this Saturday, March 17th, but forecasts from the National Weather Service have predicted heavy rainfall and wind at the scheduled start time for the parade and throughout the day on Saturday. The chance of rain forecasted has been listed as 90%.

The St. Patrick´s Day Parade in Hermosa is a gem of a community event where girl scouts, bag-pipes, and DeLoreans can be found parading next to each other. This year Mother Nature proved to be untimely but the ultimate factor concerning the re-scheduling of the parade is public safety. According to Chamber Executive Director Maureen Hunt, ““The parade is listed as taking place “Rain or Shine”, but safety concerns are the biggest factor in our decision to reschedule the parade to March 24th.” All entrants in the parade are being contacted regarding arrangements for the new date of the parade.