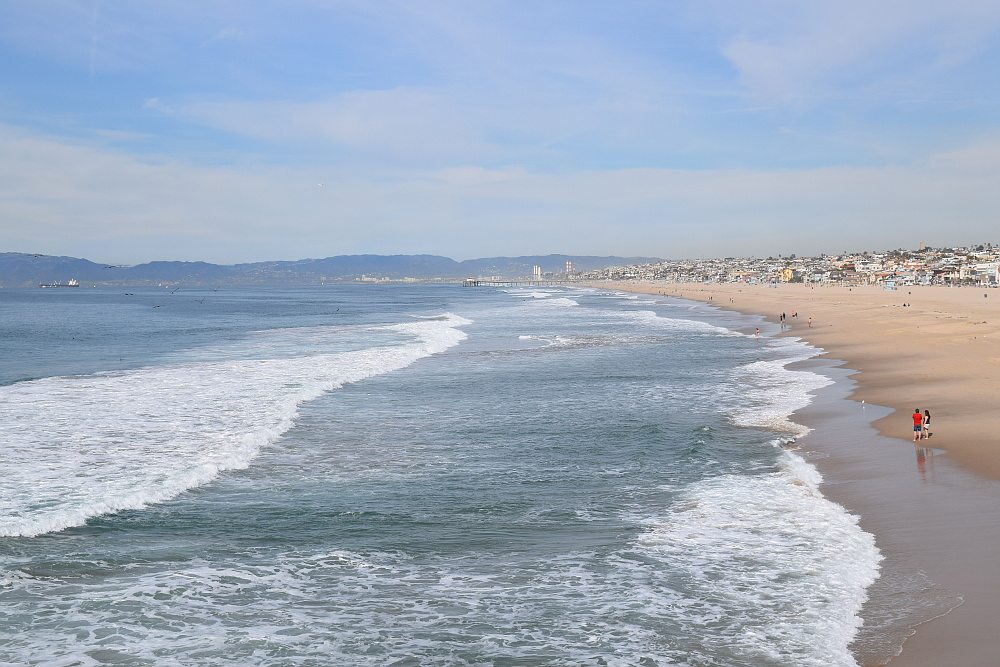 The gatekeepers of the Santa Monica Bay and California coast released their 2016 Beach Report Card on Thursday just in time for Memorial Day Weekend fun, a time of year when many of us start to opine for lazy beach days and less responsibility. Although Los Angeles County and the greater Southern California region have been under severe drought conditions lately, non-profit environmental group Heal the Bay believes lack of rain and run-off have steadily improved beach water quality during their 2015 – 2016 reporting period. Water quality remained in the excellent to very good range at the vast majority of beaches in LA County last year, according to Heal the Bay’s 26th annual Beach Report Card.

Even so, the report card wasn’t marked with just high letter grades, a historically dirty South Bay beach once again can be found in HTB’s Beach Bummer List, which ranks the top ten most polluted beaches in the state, based on levels of fecal bacteria and other harmful bacteria. Chronically dirty Mother’s Beach in Marina del Rey ranked as the sixth most polluted beach in the state and the beach approximately 100 yards south of the Redondo Pier took the 7th spot on the Bummer List. Find all the details about a beach near you and how it scored on HTB’s 2016 Report Card at www.healthebay.org/beach-report-card

Memorial Day Weekend at BALEENkitchen: Friday, May 27, 2016 – Monday, May 30, 2016 Why wait until Monday to celebrate Memorial Day? Join BALEENkitchen all weekend for BBQ, live music and drink specials! The party starts Friday night with Dave Boyles performing some alternative R&B in the lounge, then on Saturday night Redondo Beach band Crow Hill serenades BALEENlounge with some classic rock & country tunes. Daily happy hour deliciousness all weekend 3:00 p.m. to 7:00 p.m. too. Also happening this weekend is Sunday Funday, when BALEENkitchen turns the last Sunday of every month into a Funday complete with epicurean delights like Mimosas, Sangria, Build Your Own Bloody Mary bar, an A La Carte Brunch and live music. more info

South Bay Boardriders Big Wave Challenge Awards : Friday, May 27, 2016 – 6:00 PM The year of El Nino produced some mighty curls during winter in and around South Bay beaches and breakwalls, so join the South Bay Boardriders Club as they award the photographers and surfers who documented and rode the wild surf Friday night at the Hermosa Beach Community Center. The Hermosa Beach Community Center is located at 710 Pier Avenue. tickets

Fiesta Hermosa Starts Memorial Day Weekend, Beer Garden, Free Bike Parking & More: Saturday, May 28, 2016 to Monday, May 30, 2016 – 10:00 AM- 6:00 PM The unofficial start of yet another glorious South Bay summer makes some noise this Memorial Day Weekend as Fiesta Hermosa celebrates its 44th year. Just like years in the past, crowds are expected to swell well above the 100,000 mark to what is arguably North America’s largest Arts and Crafts Fair. Thus, the best mode of transportation is a beach cruiser or a pair of flip-flops. more info

Ultimate Billy Joel Tribute, The Stranger: Saturday, May 28, 2016 – 8 P.M. The Stranger is the premiere tribute to the music of one of the world’s most talented performers – six-time Grammy winner, Billy Joel. The high-energy interactive concert is fronted by accomplished New York pianist and vocalist Mike Santoro, and backed by some of the finest musicians in the business. Tickets for the 8 p.m. performance are $48-$58, with a $10 discount for children ages 12 and under. For more information or to purchase tickets call the box office at (310) 544-0403, ext. 221, or go to www.palosverdesperformingarts.com. The Norris Theatre is located at 27570 Norris Center Drive in Rolling Hills Estates.

Concert Under the Guns at Battleship IOWA: Sunday, May 29, 2016 – 6:00 PM to 10:00 PM Come be a part of a Battleship IOWA new summer concert series Concert Under The Guns, featuring Mick Adams and the Stones, the premier Rolling Stones tribute band. Each concert will be held on the dock directly in front of the Battleship IOWA. General admission seating is FREE and available on a first come, first serve basis. The concert area will open for at 6:00 pm. Music will start at 6:30 pm with the main act taking the stage at 8:00 pm. Food trucks will be on site and our Beer Garden will be selling beverages. more info

Redondo Beach Memorial Day Observance & BBQ: Monday, May 30, 2016 – 1:00 pm The public is invited to attend the 2016 Memorial Day Observance at the Veterans Memorial in beautiful Veterans Park in Redondo Beach at 1 p.m. on Monday, May 30. The service will be followed by a BBQ picnic sponsored by the Redondo Elks Lodge #1378 in the Elks parking lot south of the Lodge next to Veterans Park. The BBQ is free for all veterans and members of the military, police officers and firefighters. A $5 donation is requested from all others. more info