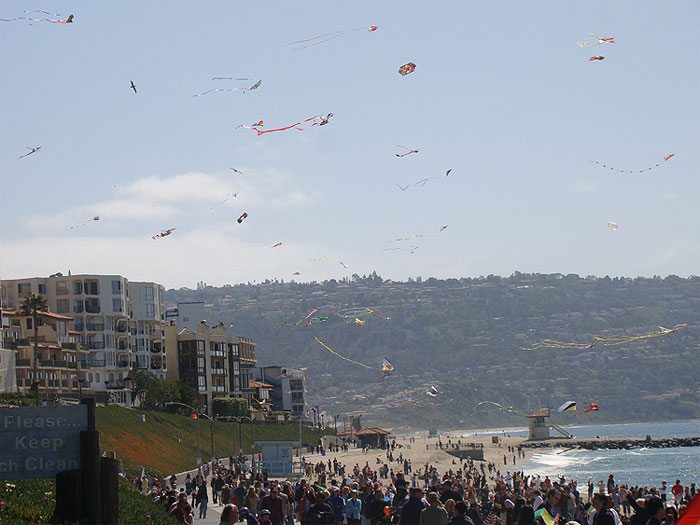 The Redondo Pier Association hosts one of the longest running kite festivals in Southern California this Sunday, March 13th. The Kite Festival has been produced by the Sunshine Kite Company since 1974 and is one of the more visually stunning events around the South Bay. Other eclectic kite festival events include annual Hot-Dog on a Stick Eating Contest & a martial arts demonstration. This year’s Festival of the Kite runs from noon to 5:00 p.m. and takes place in and around the Redondo Pier. more info

A heads up to all the parents, volunteers, groms, weekend warriors, young at heart… Tomorrow’s South Bay Boardriders Surf Contest sponsored by Jack’s Surfboards at El Porto has been POSTPONED according to their Facebook page.

El Segundo Brewing Co. Day One Bottle Release: Hop Tanker (Double IPA) ESBC goes the distance with another Day One, fresh from the source bottle release of Hop Tanker this Friday. By distance,we mean ESBC is self-distributing Hop Tanker to bottle shops and retailers across Southern California, all seven counties to be exact. ESBC is located at 140 Main St in the heart of Midwestern South Bay.

Meet the Grunion at Cabrillo Marine Aquarium: Friday, March 11, 2016 – 8:00 PM – Midnight Watch the silvery fish come up on the beach to spawn! Learn about the interesting mating rituals and growth of this curious fish. The aquarium opens at 8 pm and an auditorium program begins at 9, followed by guided observation at the beach. Warm clothing and a flashlight are recommended. CMA is located at 3720 Stephen M White Dr. in San Pedro. more info

“Dancing With The Stars” Alumnae, Anna Trebunskaya, to Grand Marshal Hermosa Beach St. Patrick’s Day Parade The Hermosa Beach Chamber of Commerce and Visitors Bureau announced this week that world-famous dancer Anna Trebunskaya is the Grand Marshal for the 22nd Annual Hermosa Beach Saint Patrick’s Day Parade on Saturday, March 12th beginning at 11 a.m. Anna, who captured television fame in 2006 as an instructor on “Dancing With The Stars,” owns You Can Dance ballroom studio with her mother Irina in Hermosa Beach and is elated to be the Chamber’s honored guest this year. more info

Hollywood Stars of Magic in Hermosa Beach: Saturday, March 12, 2016 – 2:00 PM All performers are currently performing in Hollywood and Las Vegas. This is an all ages show. Hosted by Sisuepahn Phila and Tim Wise, this is a show you do not want to miss! Hermosa Beach Second Story Theatre (in Community Center at 712 Pier ave. Hermosa Beach). Advance tickets are $15 or $20 at the door; call (310) 971-5335.

Village Runner St. Patrick’s Day 5K: Sunday, March 13, 2016 – 8:00 AM Before rounds of green beer or pints of the plain cause heavy lifting, join a South Bay racing holiday in what has become one of the more popular 5K runs, community walks, and kid races around. This event, put on by the Village Runner and is open to the entire public, toddler and weekend warriors are welcome. more info

LUNAFEST Short Films, By, For and About Women: Sunday, March 13, 2016 – 2:00 PM LUNAFEST is a traveling short film festival by, for, about women that will visit over 175 cities throughout the remaining 2016 season. Featured films this season include stories of reflection, hope and humor from around the world. Hosted by Soroptimist International Manhattan Beach; LUNAFEST will be screened at Redondo Beach Performing Arts Center located at 1935 Manhattan Beach Boulevard. Tickers are $35. more info